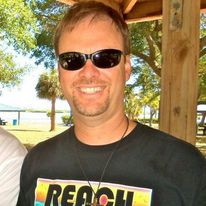 Bob Jernigan was born in Fort Pierce, Florida, in 1965. He attended local schools, graduating from Fort Pierce Central in 1983. Bob went into the family real estate business right out of high school, started a home inspection company which he operated for ten years, and then went to work for the Martin County Property Appraiser’s Office.

“In 2005 I began going through the Alpha Series at a home group hosted by Dave and Paula Sheil. I knew Christ, but up until that time I did not really understand grace. Alpha was life changing. In 2007 I began volunteering at a faith-based addiction center. They asked me to teach a class, the Alpha Series, and I had never taught anything before. I believed that this was the path God had for me, so I basically said to God, ‘I’m going to need You to do this,’ and He did!”

Bob was ordained as a minister of the Gospel by Alpha Ministries in March of 2008. He began teaching the Alpha Series to inmates in the county jail and working part-time as assistant director of Safe Harbor Life Center in Fort Pierce. “I enrolled in college and began taking classes. College was a challenging and awesome experience.” Bob graduated from Indian River State College with a bachelor’s degree in human services in 2015 and became a Certified Addiction Professional (CAP) in the State of Florida in 2017. Bob received his master’s degree in mental health counseling from Webster University in 2020. He currently works as a mental health counselor at the Mental Health Association in Indian River County, Florida.

Bob and his wife, Wendy, were married in 1985 and live in Fort Pierce. They have three daughters and five grandchildren (one in heaven). When not working, Bob enjoys trail-running, hiking, hunting, muzzle loading, and spending time outdoors with his family.

Loaves&Fishes is an outreach of REACH Church that feeds homeless and indigent neighbors in Fort Pierce. We need volunteers to: prepare food and to serve...

REACH Community Church will again offer an Outreach Ministry for people in our community who are homeless or indigent. We plan to begin feeding on...

REACH THRIFT store is NOW at 2911 N. US Highway 1 in Ft Pierce, North of St Lucie Blvd, across from The Marine Connection.  Volunteers are always appreciated and...

Visit all of our pages!

Reach into the Vault